The most important persons behind the development of the new Testarossa were: 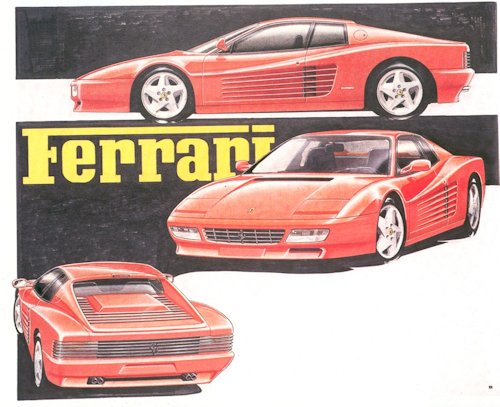 From the outside, the main differences with the Testarossa were: Internally there were changes to the seats, steering wheel design and trim details. Mechanically there were numerous changes to the engine (type F113D040 with Bosch Motronic 2.7) and to the gearbox, also lowering them in the chassis by 30mm.

A very complete description of all (technical) changes can be found in the magazine Progetti #10.

The first modified 1:1 models were tested in the windtunnel of Pininfarina in early 1988. The development of the engines started in early 1989. They tested 24 engines in 22 prototypes (18 US versions and 4 Euro versions). These prototypes were modified Testarossas and were called F110 EB. Most important aspects of the testing were dependability and certification. The majority of the tests were performed between February 1990 and July 1991, at the tracks of Balocco, Fiorano, Mugello and Nardo, but also on the normal road and in northern Sweden (ABS tests). The prototypes probably didn't have any serialnumbers, but just a two-digit internal number. Pre-production started in January 1991 and most of those cars were meant for the USA. Among the prototypes / pre-productions cars are s/n 86815 and s/n 87440. Both cars still exist and are both last known to be in the USA.